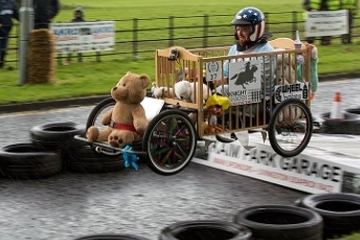 The race was organised as a charitable event by Livingston Round Table at Howden Park. The team, called "Wheel Bairns", was composed of Mr Collin, Mr Dodds, Mr Gallagher, Mr McCluskey and Miss Potter, the soapbox named, "Wowdie Cottro" was built in two weeks during the holiday period, mostly from donated parts.

The event saw an exciting range of home-made soapboxes navigating obstacles and ramps with all the usual thrills and spills.

Wheel Bairns managed the fastest time and were also overall winners which was absolutely fabulous!

The monies raised ensure the Round Table can continue to contribute to charities within the community. The event was very well attended and despite the inclement conditions everyone appeared to enjoy themselves. It was really good to hear so many positive comments regarding the event.